How to not let your voice fall apart during COVID-19

Hans Zimmer Talks ‘Dune,’ James Bond, ‘The Lion King’ and Scoring His Way Through the Pandemic

If you’re a hip-hop fan it’s almost impossible not to know the name Mike Dean, as his sound is woven so deeply into the last quarter century of music. A low-key legend who prefers to let his music do the talking, Dean’s back catalog boasts Dirty South pioneers Scarface of the Geto Boys, UGK (Underground Kingz), Tha Dogg Pound, and Tech N9ne, along with Tupac Shakur, Jay-Z, and Travis Scott. Since 2004 he’s been the right-hand man in the studio, as well as on tour, with Kanye

7 NYC Venues that Should Be on Your Radar

Image via Shutterstock Booking shows regularly can elude many artists. They submit emails and cold call venues, spin their wheels and waste hours without much to show from their efforts. Most of the time it’s because they are not working strategically. Remember to take into account the following parameters when determining if a particular venue is a good fit: #1. What type of shows get booked at that venue? Are they more for private parties, acoustic acts, 9-piece jam bands,

Here's the Best Time to Release Your Album in 2018

Over the past few years, I’ve put together a month-by-month guide with the best time to release your album. It’s patently simple: which months would maximize your release and which would destroy it? This year, I’m taking it a up a notch and giving you additional ideas of how you can maximize your release in a specific month or how to schedule based on your album’s specific subject matter or genre. There is one rule that stays the same: start planning your album release and re

Dance music wouldn't exist without it Following ground-breaking experiments in France, it was the great American inventor Thomas Edison who first showed off the Phonograph, the turntable’s earliest precursor, to Scientific American magazine 140 years ago. At his laboratory in Menlo Park, California, Edison had assigned one of his trusted creatives, John Kruesi, to the project (making him the device’s true creator). A stylus recorded sounds onto thick tinfoil wrapped around a

In Meek Mill's Words: What The Rapper's Fight Says About the Justice System

In newly released quotes from a 2015 interview, the rapper detailed the reality of his legal situation -- and the "mental torture" of the prison term he tried to escape. Back in the summer of 2015, Meek Mill sat in a restaurant in New York’s meatpacking district and described the horrors of spending several incarcerated months in solitary confinement. “I know it can’t be healthy for your mind,” he said, after ordering a mid-afternoon spread of mussels and crab cakes. “Being i

‘Whisperpop’: why stars are choosing breathy intensity over vocal paint-stripping

Singing. It’s nice to listen to, isn’t it? But since modern TV talent shows shrieked their way into view at the turn of the millennium, the message to audiences has been clear: if your vocal runs won’t make Nicole Scherzinger punch the air, or if your ability to sing eight notes where one would suffice can’t prompt a wink of approval from Simon Cowell, your journey ends here. Selena Gomez’s Bad Liar: a hypnotic banger of a track Also this week: it’s Liam Payne’s turn to relea

Streaming music services have made record reviewing superfluous. But are we really better off withou

Image: Detail from Red 1983 by Mike Winkelmann. Courtesy the artist. Like many creative types, writers believe their work is resistant to automation. Their language is too rich and complex to be reduced to data and code. But what if their readers are less interested in complexity than straightforward, direct information? Automation and artificial intelligence don’t necessarily have to emulate human behavior perfectly in order to profitably approximate the functions humans per

How to “Sell” Your Songs

The question I am most often asked by songwriters is, “How do I sell my songs?” The misconception underlying this question is that recording artists purchase the songs they record. But that is not the way it works. The more appropriate question would be, “How do I get my songs recorded by artists and included in TV shows and movies?” Songwriters typically achieve these goals by publishing and licensing the rights to their songs—not by “selling” them. The relatively rare insta 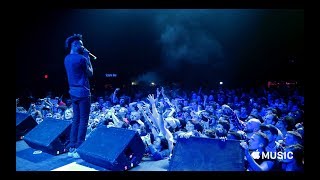 Danny Brown: Live at The Majestic The film will be released via the streaming service on Nov. 7. Danny Brown is heading back to his stomping grounds of Detroit to perform his first-ever show at Detroit's Majestic Theater and Apple Music will chronicle the rapper's preparation process in the upcoming documentary Danny Brown: Live at The Majestic, out Nov. 7. "This my party right now, I'm partying with my family right now in Detroit," Brown proclaims to the crowd at one of his

Do bands such as LCD Soundsystem ever split up – or is ‘quitting’ just the first stage of a long, tactical manoeuvre? The last 15 years in music have made over-enthused geeks of us all. Fans carp and applaud every time a group of people who haven’t hung out for a while decide to hang out again, enthralled by the mere act of reunion. Recently, however, the trend has accelerated. Bands are reuniting after just a few years apart, and embark on a huge “final” tour before they go;
1
2